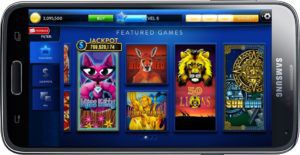 Heart of Vegas features 11 games that are found in Las Vegas and in casinos around the world with several more games slated to be released in the app in the near future.

Heart of Vegas is built on a multi-platform architecture, meaning users can enjoy Heart of Vegas on Facebook, iPad™, iPhone™ and now on Android, all using the same account.

“Our goal is to delight social casino players everywhere, everyday, and we are pleased to add Android users to the broader Heart of Vegas ecosystem. With market leading products now on Facebook, iOS and Andoid, we are continuing to highlight the importance of social and mobile gaming to Aristocrat’s broader strategy.”

The Heart of Vegas app premiered on Facebook in July 2013, came to iPad in September 2014, and to iPhone earlier this year.

The Heart of Vegas app was created by Aristocrat and its social and mobile gaming subsidiary, Product Madness, which remain dedicated to delivering new ways for players to enjoy social game content.

About Aristocrat
Aristocrat Technologies Inc. is a subsidiary of Aristocrat Leisure Limited (ASX: ALL), a leading global provider of land-based and online gaming solutions. The Company is licensed by more than 200 regulators and its products and services are available in more than 90 countries around the world. Aristocrat offers a diverse range of products and services including electronic gaming machines and casino management systems.